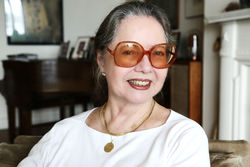 Ellen Taaffe Zwilich (b. 30 April 1939, Miami, Fla.) is an American composer and violinist.

Zwilich began her studies as a violinist, earning a B.M. from Florida State University in 1960. She moved to New York City to play with the American Symphony Orchestra under Leopold Stokowski. She later enrolled at Juilliard, eventually (in 1975) becoming the first woman to earn the degree of Doctor of Musical Arts in composition. Her teachers included John Boda, Elliott Carter, and Roger Sessions. She first came to prominence when Pierre Boulez programmed her Symposium for Orchestra with the Juilliard Symphony Orchestra in 1975.

Some of her work during this period was written for her husband, violinist Joseph Zwilich. He died in 1979, after which Taaffe Zwilich refocused her compositional efforts on "communicating more directly with performers and listeners," softening her somewhat harsh, jagged style.

Her Three Movements for Orchestra (Symphony No. 1) was premiered by the American Symphony Orchestra in 1982, and it won the 1983 Pulitzer Prize, after which her popularity and income from commissions ensured that she could devote herself to composing full time. From 1995 to 1999 she was the first occupant of the Composer's Chair at Carnegie Hall; while there, she created the "Making Music" concert series, which focuses on performances and lectures by living composers, a series which is still in existence.

Zwilich's compositional style is marked by an obsession with "the idea of generating an entire work – large-scale structure, melodic and harmonic language, and developmental processes – from its initial motives." In addition to large scale orchestral works like Symbolon (1988), Symphony no. 2 (Cello Symphony) (1985), and Symphony no. 3 (1992), all of which were commissioned by the New York Philharmonic, she has written a number of notable, smaller-scale concertos for relatively uncommon instruments. These include works for trombone (1988), bass trombone (1989), flute (1989), oboe (1990), bassoon (1992), horn (1993), trumpet (1994) and clarinet (2002). She has also written a small number of choral works and song cycles.