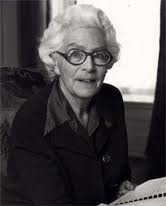 She grew up in an unmusical home without having access to recorded music. Yet, she began to write music for the piano at age six and knew from childhood that her vocation was to be a composer. She once said, “Being a composer is a life sentence from which there is no escape.” Listeners to her works are grateful for her music and her life.

Elizabeth Maconchy was born in England but spent much of her childhood in Ireland. When she arrived at the Royal College of Music in London in 1923, she had ability and persistence but lacked experience in listening to serious concert music. She won a few prizes and scholarships while studying with Charles Wood and Ralph Vaughan Williams, but was denied the lucrative Mendelssohn Scholarship because, according to Sir Hugh Allen, she would “only get married and never write another note.” In 1929 she went to Prague after receiving the Octavia Traveling Scholarship and studied with Karel Boleslav Jirák. In 1930 the Prague Philharmonic Orchestra premiered her Concertino for piano aand orchestra.

Although Elizabeth Maconchy absorbed styles and techniques from her studies and environment, her music was peculiarly her own. Hugo Cole characterizes her works as being primarily contrapuntal, with short and compact motifs and much use of close canonic processes. Maconchy composed (among others) 27 orchestra works, separately and with soloists; 59 solo and chamber pieces; 42 choral works; six operas; three ballets; and several incidental pieces. Her Sinfonietta for orchestra (1975) was written 45 years after her Concertino for piano and orchestra; the string quartets were composed from 1933 to 1984. Her cantata Héloise and Abelard (1978) was her last large-scale work.

Other compositions for winds include Music for Wind and Brass; Colloquy for flute and piano; Fantasia for clarinet and piano; Excursion for solo bassoon; Concertino for clarinet and chamber orchestra; Tritico for two oboes, bassoon, and harpsichord; a wind quintet; an oboe quartet; and an oboe quintet.