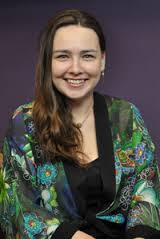 Elena Roussanova (Lucas) (b. 1974, Moscow, USSR), is a Russian-American composer, pianist, and educator.

Elena's prolific writing encompasses many diverse styles, including music for orchestras, wind ensembles, chamber ensembles, solo pieces as well as Broadway and popular style songs. Hers professional career includes a long list of accomplishments in composition, her foremost passion, as well as teaching and performance.

She was a composer for the Boston Symphony Orchestra in residence (2020), and was commissioned to write a new composition and to serve as a clinician. Her Symphonic Suite was recently featured on the prestigious satellite radio SiriusXM Symphony Hall, on Classical Music with Preston Trombly, and on Living American. Her compositions have been performed and recorded by The Prague Radio Symphony Orchestra under Julius P. Williams, Omaha Symphony under Thomas Wilkins, The Tchaikovsky State Orchestra Of Moscow under Vladimir Fedoseyev, The Moscow Radio Orchestra, the Principal Military Orchestra Of Russian Federation, the Russian National Orchestra Brass Quintet, members of the Bolshoi Ballet, the Dallas Brass, Poeria Symphony Orchestra, and numerous orchestras at universities and festivals throughout the world.

Elena has been awarded The American Prize in Composition for orchestra music 2017/2018.

Currently [2021], Elena holds the position as professor in composition at the Berklee College of Music. Previously she served on the faculties of Boston University, New England Conservatory and as co-artistic director of Berklee International Composers Institute (2008-2015) Boston, Mass.

Elena is a member of the United Russian Composers Union, Russia and the American Society of Composers, Authors and Publishers (ASCAP), U.S.A. and a voting member of The National Academy of Recording Arts and Sciences (Grammy).