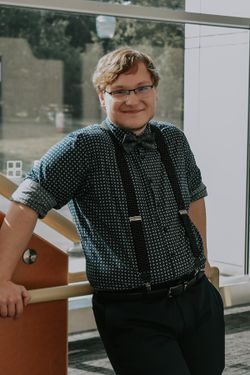 Electric City is inspired by the colorful, glowing, metropolitan beauty of the big city at night. I say "the big city" as a general term; for me, this city is Dallas, Texas, a place that is quite close to my hometown and that I have seen and been to frequently. I am always in awe of both the visually pleasing colors of the night city as well as the powerful sense of vitality and life, and as I am frequently in Dallas to hear concerts performed by the Dallas Winds, I have grown to have a strong musical association with this night-life aesthetic. When Dr. Paul Nolen, the saxophone professor at Illinois State University, asked me to compose a work for the ISU Saxophone Studio during my time studying at ISU in 2019, I had been particularly missing my home, and so I chose to act on my yearning and write Electric City as an ode to the beauty of Dallas at night.

It was later, in 2022, that my friend and colleague Josh Trentadue and I discussed the idea of arranging the work for wind ensemble. I've had the privilege of working with Josh for many years; we work together as board members for the Millennium Composers Initiative, and we are founding members of the Aurora Tapestry Collective. Josh has a long record as an astounding arranger, and when he suggested doing an arrangement of Electric City, I gladly agreed to allow it; I knew it would be an excellent arrangement, and it's always so wonderful to be able to share my music with my friends. This resulting version of Electric City is one that is imbued with the musical voice and tendencies of both Josh and myself.

Musically, the work is informed by both classical and non-classical music that I listen to, and particularly by one of my favorite songs, M83’s “Midnight City”. Inspired by the vividly descriptive lyrics of that song, Electric City can be heard as a joyride through a big city that passes through sparkling lights and reflective skyscrapers in the dark of night, accelerating until a final gear shift sends us blazing into the darkness with the glow of the city behind us.