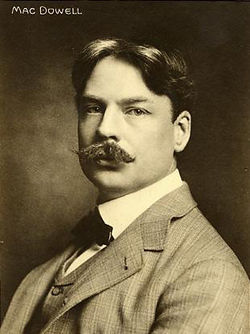 Edward MacDowell received his first piano lessons from Juan Buitrago, a Colombian violinist who was living with the MacDowell family at the time. He later received lessons from friends of Buitrago, including the Venezuelan pianist and composer Teresa Carreño.

His family later moved to Paris, France, where in 1877 he was admitted to the Paris Conservatoire. He then continued his education at Dr. Hoch's Conservatory in Frankfurt, Germany where he studied piano with Carl Heymann and composition with Joachim Raff. When Franz Liszt visited the conservatory in 1879 and attended a recital of student compositions, MacDowell performed some of his own compositions, along with a transcription of a Liszt symphonic poem.

The MacDowells settled first in Frankfurt, then in Wiesbaden. From 1885 to 1888 MacDowell devoted himself almost exclusively to composition. Driven in part by financial difficulties, he decided to return to the United States in the autumn of 1888.

The MacDowells lived in Boston until 1896, when Edward was appointed professor of music at Columbia University. He held this position until 1904. In addition to composing and teaching, from 1896-1898 he directed the Mendelssohn Glee Club. MacDowell composed some music for the group to perform.

From 1896 to 1898, MacDowell also published 13 piano pieces and four partsongs under the pseudonym of Edgar Thorn.

MacDowell was also a noted teacher of the piano, and his students included John Pierce Langs, a student from Buffalo, NY with whom he became very close friends. Langs was also close to noted Canadian pianist Harold Bradley, and both championed MacDowell's piano compositions.

In 1904, MacDowell was one of the first seven people chosen for membership in the American Academy of Arts and Letters. After this experience, the MacDowells envisioned establishing a colony for artists near their summer home in Peterborough, New Hampshire.

Season Affective Disorder, possible poisoning and an accident with a hansom cab contributed to MacDowell's decline and relatively early death. He was best remembered for his second piano concerto and his piano suites Woodland Sketches, Sea Pieces, and New England Idylls. Woodland Sketches includes his most popular short piece, To a Wild Rose.