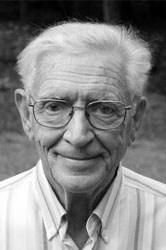 Mr. Madden had an eclectic career as a performer, composer/arranger, conductor, and educator. In education, while residing in the Boston area, he was director of bands and orchestra at Brookline High School, held visiting professorships at the University of Alaska, Boston University and the University of New Hampshire. Later, with Jo Scott, he co-founded the nationally known Fairbanks Summer Arts Festival where for 10 years he was artistic director, symphony orchestra conductor, instructor, and jazz trombone soloist.

As a Boston free-lance trombone and piano artist, he performed with the orchestras of the Shubert, Colonial, and Wang Center theatres, the Ice Capades, Ice Follies, and even the Ringling Bros. Circus Band. He formed “Music by Eddie Madden” a big band society dance orchestra. In addition, he has been music director/arranger for 45 original Boston-area musicals including those of the Massachusetts Institute of Technology “Tech Show” and Boston’s famous Vincent Club Show.

In 1957 A Colonial Rhapsody, his initial work for concert band, was published. Other works for band soon followed. His prolific pen has also created original commissioned arrangements and compositions for big bands, acts, choral groups, orchestras and over 400 titles for the marching bands of Arizona State, Clemson, Brigham Young, Stephen F. Austin, Harvard and other universities.

A characteristic of Madden's writing is his concern for the dominance of melody and/or countermelody along with a penchant for a rich harmonic texture consistent with the classic or contemporary stylistic period in which the work is created. It is these qualities along with an uncommon freshness and orchestration that makes his music so appealing.

After Mr. Madden retired from teaching high school band he moved to Fountain Hills, Arizona, and went about re-acquiring his copyrights from the music publishers which had originally published his many compositions but had let them go permanently out of print. Once he had gotten the copyrights back, he went about publishing the music through his own company, Coach Lane Music. And he continued composing new works that he self-published.

Madden was an annual award-winning member of ASCAP.