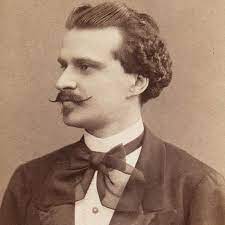 Eduard, together with his brothers Johann Strauss Jr. and Josef Strauss, made up the Strauss musical dynasty. He was the son of Johann Strauss Sr. and Maria Anna Streim. The family dominated the Viennese light music world for decades, creating many waltzes and polkas for many Austrian nobility as well as dance-music enthusiasts around Europe.

Strauss' style was individual and did not attempt to emulate the works of his other brothers or his contemporaries. But he was primarily remembered and recognized as a dance music conductor rather than as a major composer in the Strauss family, and his popularity was overshadowed by that of his elder brothers. Realizing this, he stamped his own mark with the quick polka, known in German as the "polka-schnell". Among the more popular polkas that he penned for the Strauss Orchestra, which he continued to conduct until its disbandment on 13 February 1901, were Bahn Frei!, Op. 45, Ausser Rand und Band, Op. 168, and Ohne Bremse, Op. 238. He also found time to pen a few waltzes, of which only a handful survived obscurity. The most famous is probably Doctrinen, Op.79.