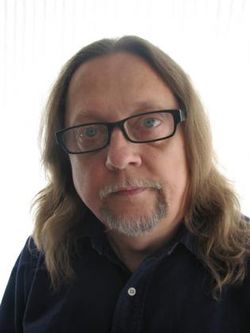 Edmund Campion (b. 1957, Dallas, Tx.) is Professor of Music Composition and Director at the Center for New Music and Audio Technologies at the University of California, Berkeley.

As a 2016 Guggenheim Fellow, Mr. Campion composed for the Contemporary Gugak Orchestra, an ensemble of 50 musicians performing on ancient Korean instruments. In 2015, the Ensemble Intercontemporain co-commissioned Campion and audiovisual artist Kurt Hentschläger for the 25-minute, Cluster X. The multi-media work was premiered at the Philharmonie de Paris in October of 2015 and toured the United States. In 2012, while Composer in Residence with the Santa Rosa Symphony, Campion was commissioned for The Last Internal Combustion Engine, written for full orchestra, Kronos Quartet and electronics. The piece was premiered as part of the opening season of the new Green Music Center and featured the use of the CNMAT Spherical Loudspeaker Array. Joshua Kosman of the San Francisco Chronicle called the piece “a vivid and richly imagined concerto.” (http://edmundcampion.com/) (http://cnmat.berkeley.edu/).

Campion is the recipient of numerous accolades including, the American Rome Prize, the Lili Boulanger Prize, The Paul Fromm Award at Tanglewood, and the Goddard Lieberson Fellowship given by the American Academy in Rome. Other commissions include the 2011 Commande d’etat for Wavelike and Diverse, written for Les Percussion des Strasbourg and released on the ensembles 50th anniversary Universal CD collection; Auditory Fiction (2011), commissioned by Société Générale for Radio France; Small Wonder (The Butterfly Effect) (2012), commissioned by the Serge Koussevitzky Foundation for the San Francisco Contemporary Music Players; Auditory Fiction II (2014), written for the ECO Ensemble for the Venice Music Biennale.