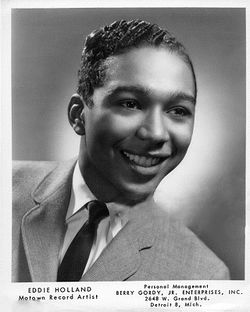 Although he was an early Motown artist who recorded minor hit singles such as Jamie, he started working behind the scenes due to stage fright. He was a member of Holland–Dozier–Holland, the songwriting and production team responsible for much of the Motown Sound and hit records by Martha and the Vandellas, The Supremes, The Four Tops, and The Isley Brothers, among others. He has written or co-written 80 hits in the UK and 143 in the US charts.

Holland served as the team's lyricist, and also worked with producer Norman Whitfield on lyrics for the songs he produced for the Marvelettes and the Temptations, like Too Many Fish in the Sea and Beauty's Only Skin Deep.