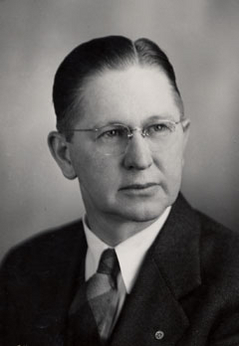 Slocum attended a one-room school before his family moved to Albion, Michigan. During his boyhood in Albion, Slocum studied piano, violin, and taught himself to play flute using the Langley Self-Tutor book. Though he became musically proficient, he did not aspire to a career in music education. At that time, bands and orchestras had not yet become recognized as a valued adjunct to education in the public schools. He earned eight athletic letters while in high school, three in baseball, three in football, and two in basketball.

Upon graduation from high school, Slocum had his eyes on a career as an engineer, and his freshman year at Albion College was slanted in this direction. The director of the conservatory at Albion convinced Slocum that his future should be in music. He became the first male student to graduate from Albion with a public school music certificate, and his teaching career began while he was still a college student by being asked to direct the local high school band. Slocum earned a bachelor's degree in music from the University of Michigan.

After several years of professional playing, he joined the Detroit public school system where he introduced instrumental music in the intermediate schools. During the Music Educators National Conference in Detroit in 1925, an educator heard Slocum's All-City Orchestra, observed two classes in woodwind and brass instruments, and lured him to a teaching position in Greensboro, North Carolina, where he taught music in the public schools for seven years.

Slocum was a visiting professor at the Universities of Michigan, Georgia, and Kentucky, and a popular adjudicator at numerous band and orchestra festivals. He also appeared as a flute soloist with many bands, theater, concert and symphony orchestras, and several circus bands. Upon his retirement from the University of North Carolina he joined the Lexington, Kentucky, Philharmonic Orchestra as its principal flutist.

After moving to DeLand, Florida, he taught at Stetson University School of Music, served on the board of advisors, and conducted the symphony orchestra for nine years. He was co-organizer and conductor of the DeLand Little Symphony.

In 1942, Slocum was elected to membership in the American Bandmasters Association and served on the board of directors in 1959, 1960, and 1963. In 1962 he was elected president of ABA. For twelve years he was province governor of Phi Mu Alpha Sinfonia for the Eastern United States. He was a member of Pi Kappa Lambda, Phi Beta Mu, Sigma Chi, ASCAP, CBDNA (serving as president of the southern division), and MENC. Slocum was an honorary member of the Florida Bandmasters Association, and the North Carolina Band Directors Association honored him for his lifetime contributions to music in the state. Dr. Slocum is listed in Who's Who in America (1947-67), Who's Who in the South, and Who's Who in Music. In 1980, Albion College established an award in his honor, given annually to the student making the most outstanding contribution to the college band.

Slocum is probably best known for his transcriptions for concert band, which are played extensively in the United States, Europe, and Japan.

Dr. Slocum continued to play his flute until shortly before he died. He is remembered for his devotion and loyal support of ABA, and as one of the outstanding pioneers in the band field.