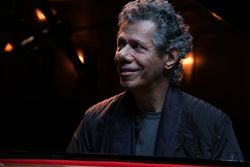 Duet Suite was created with Gary Burton in 1978; the two were pioneers in the ‘jazz duet’ format and have worked together for over 40 years. This realisation of Duet Suite was made by the talented Simon Carrington, one of the members of the LSO [London Symphony Orchestra] Percussion Ensemble, and received its UK premiere in 2018 in the Jerwood Hall at LSO St Luke’s. It is an homage by the group to Gary Burton, a colossus of vibraphone playing who retired in 2017.