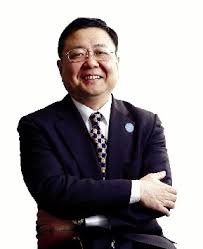 Tony Fok (Dong-Ling Huo) (b. 1957) is Chairman and President of Comba Telecom, as well as being a composer.

During the Cultural Revolution, Fok was sent to rural Hainan Island as part of the "down to the countryside" movement. In 1977 he entered the South China University of Technology, where he majored in radio communications. In 1995 he founded Comba Telecom, one of the earliest developers of mobile repeater products and wireless telecommunication services in China. Comba was listed on the Hong Kong Stock Exchange in 2003 and awarded "Business Superbrand" status in 2006.

In addition to his business achievements, Fok has distinguished himself in the artistic sphere. As a young man he was considered the artistic backbone of his school and later of his peers in the "sent-down youth." While in Hainan he taught himself in music theory and composition and composed a considerable number of vocal and instrumental works. From July 2007 to August 2008, Fok composed the songs for the symphonic choral suite Ask the Sky and the Earth, a tribute to the sent-down youth generation, which won accolades from many quarters.