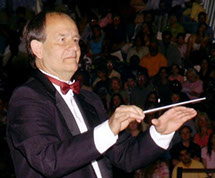 Mr. Young received his B.M. from the University of Wisconsin at Madison and his M.M. from Arizona State University at Tempe. He has studied composition with Donald Andrus, Mike Leckrone, Lawrence Hartzell, Ronald Lo Presti, and August Wegner.

Mr. Young has received numerous commissions, most notably from the Minneapolis Civic Orchestra. In the spring of 1991, he was awarded a commission from the Racine Arts Council to compose a work for the Racine Municipal Band. The premier performance of Martha's Musical Adventure for concert band and narrator took place on February 22, 1992, with the composer conducting. In 2001, a second grant was awarded to produce a commercial videotape that was published published. In 1999, he was commissioned by the Chippewa Valley Concert Band to write a piece in honor of Dr. Donald S. George, retired director of bands from UW-Eau Claire. Most recently he was named winner of the Wisconsin Music Teachers Association (WMTA) 2003 commissioning project. He is currently fulfilling that commission by writing a suite for two violins, viola, and piano. This composition, entitled The Four Faces of Valor, was premiered in Milwaukee on October 18, 2003. Mr. Young conducted his Crown Of Laurel at the 1993 ACB convention in Naperville, Illinois.

Mr. Young has experience teaching instrumental music at the elementary, middle school, high school, and college level. He directed the bands and taught music theory at Century College in White Bear Lake, Minn. He taught conducting at UW-Parkside, and is currently the director of bands and chairman of the music department at William Horlick High School in Racine. He is active as a guest composer and conductor throughout Wisconsin.