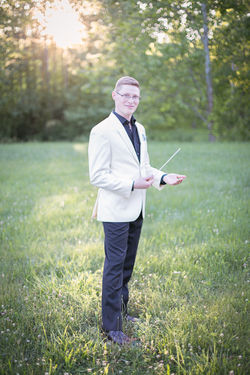 Dominick DiOrio (b. 1984, New York) is an American composer and conductor.

Dr. DiOrio earned his DMA, MMA, and MM degrees in conducting from the Yale School of Music, and his BM in composition from Ithaca College. He currently serves as a member of the board of directors for Chorus America, treasurer for the National Collegiate Choral Organization, and chair of the Standing Committee on Composition Initiatives for ACDA.

As a composer, DiOrio has been hailed for an intelligent, evocative style, which shows “a tour de force of inventive thinking and unique colour” (Gramophone). In 2014, DiOrio won the American Prize in Composition. His works have appeared at major American venues including Carnegie Hall and Lincoln Center — as well as internationally — and have been performed by renowned artists including Nathan Gunn and Yvonne Gonzales Redman. DiOrio’s recent commissioning partners include the Cincinnati Vocal Arts Ensemble & Cincinnati Chamber Orchestra, eighth blackbird, “The President’s Own” United States Marine Band, and several universities including Princeton, Cornell, and the Universities of Michigan and Illinois.

DiOrio made his conducting debut at Zankel Hall at Carnegie Hall when he was 28 years old. He has conducted performances with ensembles around the world, from the Young People’s Chorus of New York City and the Houston Chamber Choir to Allmänna Sången and Ars Verita (Sweden). In addition, DiOrio is the youngest-ever tenured member of the conducting faculty at the Indiana University Jacobs School of Music. His duties include leading the select chamber chorus NOTUS, which champions the work of living composers in concerts across the nation, including at regional and national ACDA conferences. In 2014, Indiana University awarded DiOrio the Outstanding Junior Faculty Award, the highest university-wide recognition for young faculty. In 2018 Dr. DiOrio became president-elect of the National Collegiate Choral Organization.