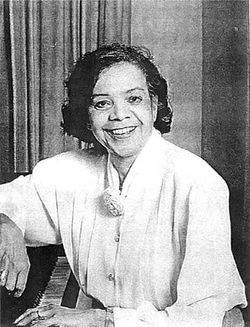 Dolores White (b. 1932, Chicago, Ill.) is an American composer, educator and pianist.

Centered in American and European classical elements, she fashions music that reaches into the rich resources of American traditions and music that draws on ethnic and international materials. She started her compositional achievements after winning second prize in the Ithaca College High School Choral Competition, 1988. Later, she was commissioned by the Cleveland Women’s Orchestra to compose an orchestral piece for the celebration of the centennial of the Chicago World Fair Exposition in 1993. The concert occurred at the Cleveland Art Museum, 1993, titled Salute to the Arts.