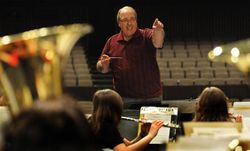 Subtitle: A Suite in Three Movements

This intriguing three-movement work offers interesting contrasts and a level of sophistication not often found at this level, while remaining amazingly playable. Different sections of the band converse musically in the first movement, The Spoken (Dialogues). The second movement, Whispers, opens with a unique tonal effect as band members whisper vocals over a piano accompaniment. As the band joins in, their gentle, lyrical lines create an intimate moment. The piece comes to a rousing conclusion as the third movement, Voices Of Song, celebrates the human voice in song.

Each movement of this composition instrumentally reflects several of the different manners in which the human voice produces sound and becomes a vehicle of communication. The first movement portrays a dialogue between several groups represented by different sections of the band. The second movement begins quietly, swells to a climactic level, then concludes with the peacefulness of the beginning. The final movement is a joyous celebration of the human voice's ability to sing.