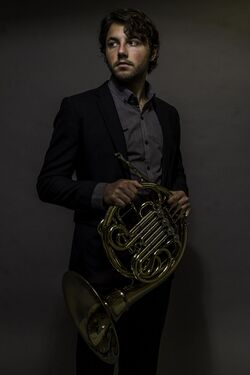 Derek Maseloff (b. 16 September 1995, Quakertown, Penn.) is an American hornist, organist and composer.

Mr. Maseloff a B.M. degree from Cornell University in China and Asian-Studies (CAPS) and a M.M. in horn performance from the University of Maryland. From 2017 to 2019 Derek was a member of the graduate fellowship quintet Wavelength Winds, where he joined forces with Konshens the MC on the “Classically Dope” project.

In 2019, Derek’s composition Witch Hunt! won first prize at the Ithaca New Music Collective Call for Scores Competition. His works for Classically Dope have been performed at the Kennedy Center Millennium Stage and alongside the National Symphony at The Anthem. In addition to composing for Classically Dope, he is an active composer and arranger at Christ the King Lutheran Church in Great Falls, Va, where he is currently [2022] director of music.

Derek is an advocate for young artists and a believer in the transformative experience of touring. For three years, Derek served as director of artistic planning for the National Youth Orchestra of China, presenting dozens of concerts on three continents with highlights at the Berlin Konzerthaus and Carnegie Hall. He recently began a new position as festival manager for the Prague Summer Nights Young Artist Music Festival.