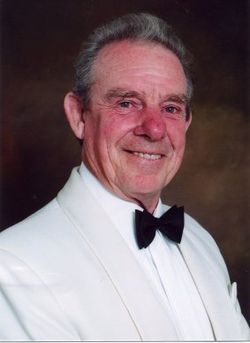 Derek Broadbent is a British conductor and composer.

Mr. Boradbent commenced playing the cornet at the age of nine with the Thornton Cleveleys Silver Band. Following a career in H.M. forces as a musician spanning some eight years, during which he studied at the Royal Military School of Music, Kneller Hall, with the late Jack Mackintosh, he returned to civilian life as a professional arranger and musical director.

He later became the conductor of the Slaithwaite band and achieved much success in contests and brought them back into the Championship section. Derek then became the resident conductor of the world famous Brighouse & Rastrick Band, a position he held for ten years. During this time he conducted them into 2nd place in the British Open Championships; Premier place in the National Championships in 1980 and 2nd place the following year. He was also responsible for their 'chart-topping' success of The Floral Dance. For three years he was the resident conductor of the equally famous Black Dyke Mills Band and was very much a part of their 1985-1986 Grand Slam , the period when they held every major title. He returned to Brighouse & Rastrick in 1987 for a period of three years as their musical director.

Since 1990 Derek has been totally free-lance as a conductor and has taken the opportunity to direct many of the U.K.'s finest bands. As an Associate Professional conductor with the Williams Fairey Band in the '90's he was once again part of another grand slam.

His adjudicating engagements have been many and include the British Open, the National Championships, the English Nationals, numerous Grand Shields and Regionals, regular appearances at Pontins and countless other contests throughout the U.K. His arrangements and compositions are highly popular in the band world and appear with great regularity in concert programs. In 1988 Derek was awarded the Iles Medal of Honour for his services to brass bands, and was the Chairman of the Association of Brass Band Adjudicators until 2010, a position he held with great respect.