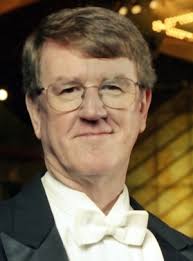 Dennis Fisher (b. 1949, Kansas) is an American conductor, composer and educator.

Mr. Fisher is the conductor of the Symphonic Band and Associate Director of Wind Studies at the University of North Texas. As Professor of Music in Conducting and Ensembles, Mr. Fisher is integrally involved with the conducting and music education programs at the University. He brings to his position a wide variety of experience and expertise as a conductor, arranger, clinician, educator, and consultant.

Mr. Fisher is very active as an arranger for all wind media, including symphonic band, marching band, and chamber music. His arrangements and transcriptions are frequently performed by major wind groups and military bands around the world. He regularly serves as a clinician, conductor, and adjudicator throughout the country having lectured, conducted and performed in Thailand, Japan, Great Britain, Europe, Scandinavia, Russia, and throughout the United States. Mr. Fisher has recorded extensively on the Mark, Eurosound, and Klavier labels with the University of North Texas Symphonic Band and Wind Symphony. He serves as recording and editing producer of the Teaching Music Through Performance in Band series compact disc recordings, and Teaching Music Through Performance in Beginning Band compact disc recording, published and distributed by G.I.A. Publications. He is the author of Improved Score Study and Focused Listening Techniques for the Conductor (2002) and is co-author of Contemporary Warm-up Studies and Techniques for Band.