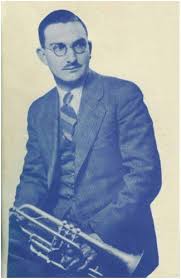 Staigers grew up in a musical environment, studying cornet with W.E. Garrett and playing in local bands. Staigers joined Sousa’s band in 1919 as assistant soloist to Frank Simon, leaving shortly thereafter to play in New York City theaters. In the mid 1920s, Nathaniel Shilkret formed his Victor Salon Orchestra and hired Staigers to play first trumpet, a position he filled for 16 years.

During the summer seasons beginning in 1927, he played solo cornet with the Goldman Band. This position provided him with wide exposure through the band’s radio broadcasts. He left the Goldman Band after the 1934 season.

Staigers moved to Los Angeles in the early 1940s and became a studio musician at radio stations and film studios. In 1950 he authored an excellent book - "Flexibility Studies" and "Technical Drills" in two parts. Published by Carl Fischer, the first book is comprised of 35 flexibility studies and 14 technical drills, while the second book is comprised of 60 technical drills for finger flexibility.