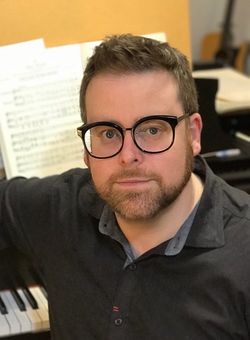 David Serkin Ludwig (b. 1974, Bucks County, Penn.) is an American composer and educator.

Dr. Ludwig attended Oberlin College for his undergraduate degree, originally intending to take a degree in art history, but eventually taking a music degree. His teachers included Richard Hoffmann. He spent one year studying at the University of Vienna. After that, he received his M.M. from the Manhattan School of Music. He completed additional post-graduate work at the Curtis Institute of Music with Richard Danielpour, Jennifer Higdon, and Ned Rorem, and at the Juilliard School with John Corigliano. He received his Ph.D. from the University of Pennsylvania, where he was the George Crumb Fellow, with his Sonata for Violin and Piano as his dissertation.

David Serkin Ludwig’s first memory was singing Beatles songs with his sister; his second was hearing his grandfather, pianist Rudolf Serkin, perform at Carnegie Hall, foreshadowing a diverse career collaborating with many of today’s leading musicians, filmmakers, and writers.

His choral work The New Colossus opened the private prayer service for President Obama’s second inauguration. The next year NPR Music named him in the world’s “Top 100 Composers Under Forty.” He holds positions and residencies with nearly two dozen orchestras and music festivals in the U.S. and abroad.

Ludwig has received commissions and notable performances from many of the most recognized artists and ensembles of our time, including the Philadelphia, Pittsburgh, Minnesota, and National Symphony Orchestras, Chamber Music Society of Lincoln Center, the Dresden Music Festival, as well as Jonathan Biss, Jeremy Denk, Jennifer Koh, Jaime Laredo, David Shifrin, eighth blackbird, the Dover and Borromeo Quartets, and the PRISM Saxophone Quartet.

Ludwig received the prestigious 2018 Pew Center for the Arts and Heritage Fellowship, as well as the First Music Award, and is a two-time recipient of the Independence Foundation Fellowship, a Theodore Presser Foundation Career Grant, and awards from New Music USA, the American Composers Forum, American Music Center, Detroit Chamber Winds, and the National Endowment for the Arts.

Dr. Ludwig joined The Curtis Institute of Music in 2011, where he is chair of composition and also serves as the Gie and Lisa Liem Artistic Advisor, and is director of Ensemble 20/21 and Curtis SummerFest.