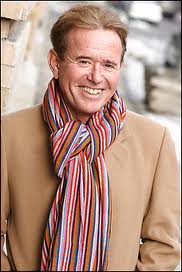 Mr. Del Tredici began his musical career as an accomplished child pianist. He studied piano and eventually composition at Berkeley. Later he trained at Princeton as a serialist.

Del Tradecic is generally recognized as the father of the Neo-Romantic movement in music. He has received numerous awards (including the Pulitzer Prize) and has been commissioned and performed by nearly every major American and European orchestral ensemble. "Del Tredici," said Aaron Copland, "is that rare find among composers — a creator with a truly original gift. I venture to say that his music is certain to make a lasting impression on the American musical scene. I know of no other composer of his generation who composes music of greater freshness and daring, or with more personality."

Much of his early work consisted of elaborate vocal settings of James Joyce (I Hear an Army; Night Conjure-Verse; Syzygy) and Lewis Carroll (Pop-Pourri, An Alice Symphony, Vintage Alice and Adventures Underground, to name just a few). More recently, Del Tredici has set to music a cavalcade of contemporary American poets, often celebrating a gay sensibility (three examples: Gay Life, Love Addiction and Wondrous the Merge). OUT Magazine, in fact, has twice named the composer one of its people of the year.

Over the past several years he has ventured into the more intimate realm of chamber music with String Quartet No. 1, Grand Trio (brought to life by the Kalichstein-Laredo-Robinson Trio and recently printed by Boosey & Hawkes), and — harkening to his musical beginnings as a piano prodigy — a large number of solo-piano works (Gotham Glory, Three Gymnopedies, Ballad in Yellow, S/M Ballade, and Aeolian Ballade).

Still, the extravagant Del Tredici remains at large and busy. In May 2005 Robert Spano conducted the Atlanta Symphony and Chorus in the premiere and subsequent recording of Paul Revere's Ride, recently nominated for the 49th Annual Grammy Awards as the Best New Classical Composition of 2006. November 2005 held the world premiere of the melodrama Rip Van Winkle with the National Symphony Orchestra conducted by Leonard Slatkin and narrated by world famous Broadway actor, Brian Stokes Mitchell.

March 2007 marked David Del Tredici's 70th birthday, with concerts given throughout the year, including the premiere of Magyar Madness, a chamber piece for clarinet and string quartet, commissioned by Music Accord for clarinetist David Krakauer and the Orion String Quartet. Another premiere was S/M Ballade for solo piano which was commissioned and performed by Marc Peloquin.