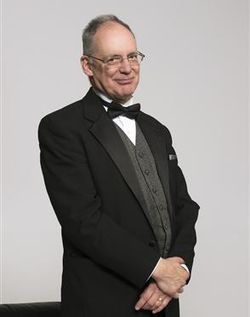 David Branter (b. 1952) is a Canadian conductor, educator, and saxophonist.

Dr. Branter has a BM, MM and DM from Indiana University. Currently Department Head at the VCC School of Music, Dr. Branter performs as both a classical and jazz saxophonist. Dr. Branter performed the world premier of John Oliver's Cha$e the Money in July of 2003 in Minneapolis and performed the work again with the Vancouver Symphony Orchestra in April 2004. He performs regularly with jazz groups led by Alan Matheson, including the CBC Jazz Orchestra, and is featured on Matheson's newly released CD Intrada. Dr. Branter also plays soprano saxophone with the saxophone quartet Saxophilia. Saxophilia, established in 1996, has premiered works by Derek Charke, John Burke and others but has a wide ranging repertoire including French works they performed in 2007 for a CBC radio broadcast. Dr. Branter is also saxophonist for the Vancouver Symphony Orchestra. In 2007 he began to perform for Colin MacDonald's Pocket Orchestra and the East Vancouver Jazz Orchestra. He has also performed with John Korsrud's Hard Rubber Orchestra, including a concert in April 2009 featuring the music of Louis Andriessen.

Work as a conductor and band, jazz band and woodwind adjudicator/clinician remain important activities. Dr. Branter participated in the 2009 Cultural Olympiad as conductor of R. Murray Schafer's Music for Wilderness Lake for the Water's Edge Festival. Dr. Branter directed, co-directed or co-produced four CDs, Midnight Sleigh Ride, Mazama, Festivo and Trajectories with the Pacific Symphonic Wind Ensemble and was music director of that group from 1996 to 1999 and then from 2013 to the present. He premiered Fred Stride's Caverns for tenor saxophone and band for their invitational performance at the World Association of Symphonic Bands and Ensembles (WASBE) in July 2005 in Singapore. The Pacific Wind Ensemble also premiered Branter's piece Cool in February 2007.