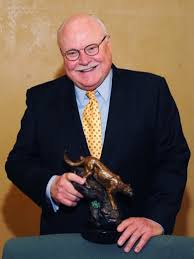 David Ashley White (b. 11 December 1944, Texas) is an American composer and administrator.

White’s hymns are found in a number of books, including the Episcopal Church’s The Hymnal 1982 and its supplement, Wonder, Love, and Praise; The United Methodist Hymnal and its supplement; the hymnal of the United Church of Christ in Japan; Great Britain’s Worship Songs Ancient and Modern, and the forthcoming Glory to God: The Presbyterian Hymnal (2013). Also, three collections of his hymns are published by Selah Publishing Co., Pittsburgh, PA: Sing, My Soul: The Hymns of David Ashley White (1996), Songs for a New Creation (2002), and New Harmony: A Harp of Thousand Strings (2006).

He was director of the University of Houston Moores School of Music 1999-2014, and holds the Margaret M. Alkek and Margaret Alkek Williams Endowed Chair.