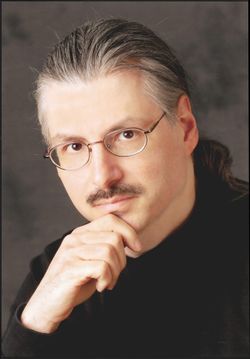 Dave Rivello (B. 1963) is an American musician, educator and composer.

Dave received his Bachelor of Music degree from the Dana School Of Music at Youngstown State University, where he completed a dual major of trumpet performance (jazz emphasis) and a music education degree. While at YSU, Dave took private lessons with Sam D’Angelo focusing on composition, arranging, and music theory. He moved to Rochester, New York, in 1987 to attend the Eastman School of Music, where he completed his master's degree in jazz and contemporary writing. During that time, he won the Down Beat magazine award for “Best Original Extended Composition”, and the International Association of Jazz Educators award for “Best Original Large Ensemble Composition”.

Mr. Rivello directs the award winning New Jazz Ensemble at the Eastman School of Music. In addition to this, he is also a freelance composer/arranger/music copyist. He has served as composer-in-residence at a number of schools, writing for their ensembles and giving clinics and private lessons. His residencies have been sponsored by Meet The Composer, Harvard Project Zero, and The New York Council of the Arts.

He leads the Dave Rivello Ensemble, his own twelve-member group, which plays his original compositions. Dave has written for and been commissioned by The Smithsonian Institute, The Youngstown Symphony Orchestra, The Penfield Symphony Orchestra, The Penfield Music Commission Project, The Youngstown State University Jazz Ensemble, David Taylor, Phil Woods, Gene Bertoncini, Randy Brecker, Jiggs Whigham, Billy Hart, and The Bill Kirchner Nonet. His music has been widely performed throughout the United States, as well as in Germany.