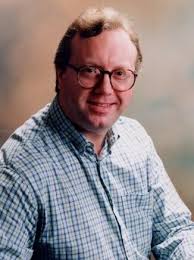 Darrol Barry (b. 1956, Salford, England) is an English composer and arranger.

When he was fourteen Barry auditioned for the school band on cornet but ended up taking an Eb bass home. Darrol joined the local brass band (Windsor) and soon moved onto baritone and then onto euphonium. At school his music teacher, Mr. Foulkes, did some arranging for the band which Darrol found fascinating. The conductor of Windsor Band, Jack Clayton introduced him to the mysteries of brass band transposition. Darrol soon discovered he had a flair for arranging and also started some small compositions. His favourite composer was Eric Ball, but he was soon captivated by the music of Gilbert Vinter and Edward Gregson. On leaving school Darrol became an apprentice joiner but continued arranging and composing while teaching himself harmony and counterpoint.

In 1978 Darrol enrolled on the band musicianship course at Salford under Roy Newsome, Goff Richards, David Loukes and Geoff Whitham who all helped him greatly. In fact, it was through Roy Newsome that Darrol went on to study with Joseph Horovitz at the Royal College of Music in London. Darrol went on to become a freelance composer and arranger working for several publishers and lectured in composing and arranging at Salford University, Barnsley and Accrington and Rossendale Colleges. Darrol has conducted and adjudicated throughout the United Kingdom and Europe at all levels.

Darrol now resides in Oman and works for the Royal Guard of Oman as Resident Composer and Arranger, a job which keeps him very busy writing and arranging music for all occasions and different combinations including bands, pipes and bands, fanfare teams and big band. Darrol has also composed several substantial pieces for symphony orchestra including two symphonies. He still finds time to compose and arrange for brass and wind bands and is working on a series of concerti and more substantial works.