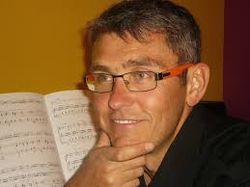 The work begins with an incantation by the solo horn addressing the occult forces. The end of this incantation is taken up by the clarinets in the form of a litany, giving rise to depths of an evil power symbolized not only by the disorganized thrill of a part of the orchestra but also by the power of the trombones in glissandi. Soon, the emergence of an evil world -- with its reminders of the incantatory theme -- is set up and inevitably leads to satanic dance.

The latter represents Satan’s universe with twisted rhythms, brilliant woodwind runs and complex textures, usually using a very rich, yet colourful orchestration, demanding extremely careful ensemble balance. This “organized chaos” prepares the frantic appearance of Satan’s theme presented by the low brass. It will only sound once on the entire piece, but powerfully, accompanied by tremolos and triplets, as well as a subsidiary subject in the flutes.

The main incantation subject returns at last, but it will be soon swept away by sharp and harsh rhythmic mockeries, confirming the violence and the insolence of the satanic world.

Danse Satanique represents the very best of the French tradition: lightness of articulation, richness of orchestration, rhythm sophistication as well as a very developed harmonic language. Kosmicki creates a fascinating sound world, not far away of that of Florent Schmitt’s Dionysiaques.

- Program Note from publisher and WASBE