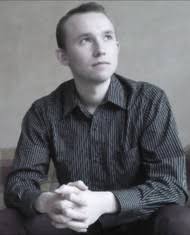 Daniel Muck (b. 1990, Vienna, Austria) is an Austrian composer and conductor.

Mr. Muck began his musical education at Music School in Staatz in violin, double bass, euphonium and percussion. In June 2010 he graduated from Vienna’s Music High School and concluded his studies at the University of Music and Performing Arts in Vienna with the Magister artium degree in March 2015. His teachers were Jan Van der Roost, Reinhard Süss, Peter Wolf, Wolfram Wagner, Thomas Ludescher and Pete McGuinness.

In summer 2009 he was commissioned to compose for and to conduct the Austrian Brass Band at the Classic Festival in Kirchstetten. He was also commissioned as composer and conductor for the Brno Philharmonic Orchestra at the same festival in July 2013. Muck has already composed works for the Vienna Trombone Ensemble, a trombone concerto for Wolfgang Strasser (Vienna State Opera), a bass-trombone concerto for Mark Gaal (Vienna Philharmonic) and is also the arranger for Phil Blech Wien.

He also received three composition prizes from the Austrian Composers' Association, two commissions and one recognition award from the government of Lower Austria, and the second prize of the Dr. Ernst Koref Foundation. His works are regularly performed at the Wiener Musikverein, Porgy & Bess, Wiener Konzerthaus, Brucknerhaus Linz and Carnegie Hall, New York. He has performed as a musician and choir-singer under conductors such as Riccardo Muti, Simon Rattle, Heinrich Schiff, Franz Welser-Möst and Rafael Frühbeck de Burgos. In October 2012, Daniel Muck was sub-conductor of the Vienna Jeunesse Orchestra. In addition, Muck won the 2013 Respighi Prize of the Chamber Orchestra of New York. In July 2014 he was Guest Conductor of the Youth Orchestra of Central Jersey and received the Special Award of the Busan Maru International Music Festival in South Korea in the following autumn. In December 2014 he made his debut at Carnegie Hall in New York and in January 2015 he won the Brazosport Original Composition Contest in Texas.

In 2016 Daniel Muck was awarded as a winner at Strauß Contest "BePhilharmonic" (Vienna Philharmonic).