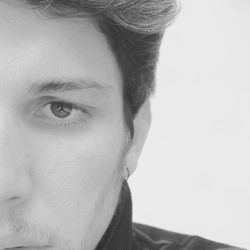 Mr. Davis began to take an interest in the composition while studying saxophone at the conservatory, having as tutor Professor Francisco Loreto and Professor Robert Andres. In 2011 he entered the Music School of Lisbon in the course of composition under the guidance of Professors Sérgio Azevedo and António Pinho Vargas. In 2014 he concluded a degree in composition at the Academy of Music in Lisbon with the score of 19 points, awarded unanimously by the examination jury. Currently he attends the second year of the Masters in Composition Area at the School of Music in Lisbon, under Professor Luis Tinoco.

Mr. Davis was the Young Resident Composer for the season 2014-2015 of the Cascais and Oeiras Chamber Orchestra (OCCO), recognized in a competition price by the members of the OCCO in 15th November of 2014. In 2016 he became Resident Composer of "Música para Bebés" (Music for babies) of the Project "Musicalmente". In 2016 he won and Honor Medal from Instituo Politécnico de Lisboa for having highlighted as a National and International Composer.

His works are based on resonance and operating environments, timbres and rhythmic dissociations. The connection of these attributes give you an autonomous character and therefore a focus on language itself.