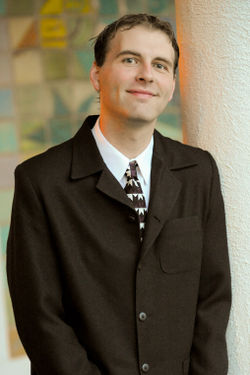 His first work for wind band, dance(fragments), garnered an honorable mention in the 2003 ASCAP/CBDNA Frederick Fennell Competition. dance(fragments) is loosely based upon a be-bop "lick" purposefully reminiscent of Charlie "Bird" Parker's playing. Indeed, Suter considered entitling the piece "Charlie Parker looked like Buddha," after the first line of Jack Kerouac's tribute to the be-bop legend. However, concerns over copyright prompted the current title. Both movements of the work occur at fast tempi, and have complex rhythmic and harmonic textures -- characteristics of Parker's playing.

This first movement Quickly, always with energy, utilizes three basic constructs: the "fragment," presented by piccolos and flutes at the outset; the "rhythmic interjection," epitomized by the percussive slap-tongue technique of the saxophone section; and sustained "bell-tone" sections creating complex densities of sound. These constructs are then arranged to create larger sections that move towards complexity and density, which then subside before continuing the process of intensification-release over again. Suter also creates contrasting textures by using oboe, trumpet and clarinet duets as well as flute solos. The climactic moment of this movement occurs with the upper woodwinds playing the fragment in octaves against the brass, which plays a longer, more sustained line in octaves as well. After the culmination of this section, the soloist and duets receive short reprises in the closing moments of the movement.

The second movement, Spirited, yet relaxed, uses two fragments -- both derived from the fragment in movement one. The initial fragment, an ascending chromatic scale in dotted rhythms, is first presented in the second bassoon part at the outset of the movement. The second fragment, a melody utilizing an ascending minor third to an eventual ascending major third, is first heard in the first trumpet part. In most cases, only a single player sounds this elusive melody, in contrast to the chromatic fragment, which receives parallel and contrary accompaniments as well as chordal treatment. Other than the juxtaposition of these two fragments in various instrumental pairings, dynamic levels and tessitura, this movement has less of a formalized structure than the first. The climax of this movement, however, does parallel the climax of the first movement. The upper woodwinds play the chromatic fragment in descending octaves against the ascending chromatic fragment of the low brass. In the middle of this texture the horns vie for attention with the melodic fragment before the whole ensemble moves into the coda via a huge crescendo and metric modulation. The coda ensues at break-neck pace and references the "parent" fragment from movement one (in upper woodwinds) before the final crescendo and climax. The bassoons state the chromatic fragment (in contrary motion) a final time, fading into silence before a final, fortissimo descending minor third by all the wind players -- the first "unanimous" gesture of the piece.

It is appropriate to cite Kerouac's ode as a summation of dance(fragments) kinetic affect:


Was his eternal Slowdown