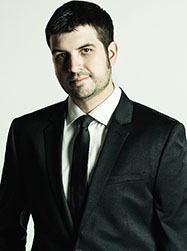 Dan Visconti (b. 1982) is an American composer and educator.

Mr. Visconti composes concert music infused with the directness of expression and maverick spirit of the American vernacular. His compositions often explore the rough timbres, propulsive rhythms, and improvisational energy characteristic of jazz, bluegrass, and rock—elements that tend to collide in unexpected ways with Visconti’s experience as a classically-trained violinist, resulting in a growing body of music the Plain Dealer describes as “both mature and youthful, bristling with exhilarating musical ideas and a powerfully crafted lyricism.”

Recent concert seasons have showcased several Visconti premieres, including a work commissioned by the Jupiter Quartet for the Chamber Music Society of Lincoln Center’s international string quartet series; a work featuring experimental video commissioned by the American Composers Orchestra for premiere at Zankel Hall; and a work for soprano Lucy Shelton and the Da Capo Chamber Players for premiere at Weill Recital Hall. Visconti’s music continues to receive performances by some of the top interpreters of contemporary music, including eighth blackbird, the 21st Century Consort at the Smithsonian, Sybarite5, the Locrian Chamber Players, and the JACK, Aeolus, Eclipse, Kontras, Jasper, Wasmuth, and Carpe Diem string quartets, at venues including Carnegie Hall, Alice Tully Hall, the Kennedy Center for the Performing Arts, London’s Barbican Theatre, and the Sydney Opera House.

His compositions have been honored with the Rome Prize and Berlin Prize fellowships, the Bearns Prize from Columbia University, the Leonore Annenberg Fellowship in the Performing Arts, the Barlow Prize, and the Cleveland Arts Prize; awards from BMI and ASCAP, the American Academy of Arts and Letters, the Society of Composers, and the Naumburg Foundation; and grants from the Fromm Foundation, Meet the Composer, the National Endowment for the Arts, and Chamber Music America. He has also been the recipient of artist fellowships from the MacDowell Colony, Copland House, the Lucas Artists Program at Villa Montalvo, and the Virginia Commission for the Arts.

Visconti recently completed a multi-year residency with opera companies including Seattle Opera, Opera Theatre St. Louis, New York City Opera, the Glimmerglass Festival, and the Metropolitan Opera as recipient of the Douglas Moore Fellowship in American Opera. In 2013 he served as composer-in-residence at the soundSCAPE festival in the Italian Alps, as well as composer-in-residence of Chicago’s Music in the Loft series. Most recently, Visconti has been appointed Young American Composer-in-Residence for the California Symphony from 2014-2017, where he will compose and record three new works with the orchestra and maestro Donato Cabrera.

As an educator Mr. Visconti's commitment to engaging new audiences often involves unconventional venues and approaches; past projects have included interactive videoconferencing presentations on the social history of music and civil rights in America as well as appearances at the Rock and Roll Hall of Fame. Visconti’s music was recently performed in Pakistan at concerts presented by Cultures in Harmony, an outreach organization promoting cross-cultural communication through music.

Visconti serves as composer and Director of Artistic Programming at Chicago’s Fifth House Ensemble, a nonprofit organization that reaches new audiences with an emphasis on civic outreach, educational programming, and collaborative projects with other artists. He is also composer-in-residence at the Fresh Inc Festival, where he works with young entrepreneurs in building musical careers in line with their own unique vision and values.