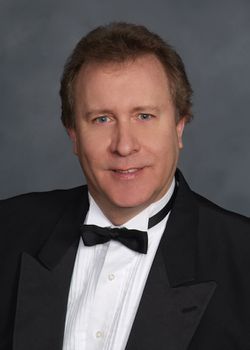 Dan Rager (b. 1956, Cleveland, Ohio) is an American composer and educator.

Dr. Rager has over 250 compositions and arrangements published. These works include symphonies, concertos, divertimentos and a large assortment of works for brass, woodwind, percussion and choral. His compositions are in a variety of styles from classical, jazz to contemporary tonal and atonal works. Many are on state required school contest lists and cataloged in the annual top 100 published compositions.

His compositions have been performed and recorded by The Cleveland Orchestra, The Cleveland Chamber Symphony, Frederick Fennell Symphonic Winds, The Washington Winds, and countless other orchestras and wind bands worldwide.

In addition, Dr. Rager was the first American conductor/composer from Ohio (USA) invited to conduct and lecture in Russia, which subsequently provides annual tours throughout the country. In 2009, he co- founded the NACUSA (National Association of Composers USA). In 2013, Professor Rager was the first American music educator invited to Argentina. He annually conducts and lectures at the Gilardo Gilardi Music Conservatory, among others, in La Plata and Buenos Aries. In 2018 he embarked on a national conducting tour of Argentina, performing with a variety of wind-bands and chamber orchestras.