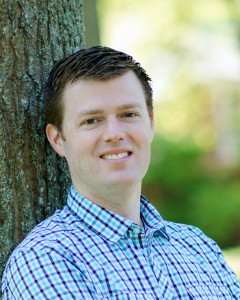 Dan Forrest (b. 1978) is an American composer and pianist. Dan holds a doctoral degree in composition from the University of Kansas and a master’s degree in piano performance.

Dan has been described as “a composer of substance” (Columbus Dispatch), whose works have been hailed as “…magnificent, very cleverly constructed sound sculpture” (Classical Voice), and “superb choral writing…full of spine-tingling moments” (Salt Lake Tribune). In the last decade, Dan’s music has become well established in the repertoire of choirs in the U.S. and abroad.

Dan’s choral works have received dozens of awards and distinctions, including the ASCAP Morton Gould Young Composer’s Award and the ACDA Raymond Brock Award. His music has been premiered in major venues around the world, and has been broadcast multiple times on American Public Media’s “Performance Today”. His critically-acclaimed Requiem for the Living (2013) has quickly become his best-known work, with performances across the United States (including multiple performances in Carnegie Hall) and in South America, Europe, Africa, and Asia.

Dan keeps a full schedule of commissions, workshops, recordings, adjunct professorships, and residencies with universities, churches, and community choirs, collaborating as accompanist, presenting his music, and teaching composition. More information about Dan and his music can be found at www.danforrest.com.