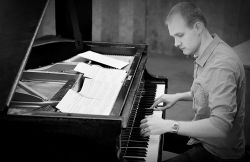 Cuckoo Variations was written in response to the folksong Cuckoo She’s a Pretty Bird , as performed by Jean Ritchie. I first found a recording of Ritchie singing this song (recorded in 1949) as part of the Alan Lomax collection in the Library of Congress digital archives. To me, this recording was hauntingly beautiful: the singing was so clear, direct and unadorned, and there was a cuckoo vulnerability and freedom in the unaccompanied singing. Ritchie was quite young when she made this recording, before her career took off in the folk revival of the 1950s, and she revisited The Cuckoo in recordings and live performances throughout her career.

I was particularly struck by a very different rendition, from a performance in 1980, with steady driving rhythms, Ritchie accompanying herself on dulcimer. Through all this listening, I became fascinated with the different ways a single singer could frame the same song, each still authentic to the song and the artist in some way, and I decided to compose a piece to explore these ideas.

Cuckoo Variations begins with a piccolo solo, directly transcribing early, unaccompanied rendition of The Cuckoo She's a Pretty Bird. Layers are gradually added as more instruments enter, slowly creating harmonies and then reframing and expanding those harmonies. Here I allow my imagination to fill the space. Before long, I depart completely from Ritchie’s performance, developing and moving farther away from the original tune, until I arrive at a driving rhythm inspired by Ritchie’s later, dulcimer-accompanied version of the song. There is a brief return to some music from the beginning before the pieces concludes with a series of bell like chords, compressing the music into austere pillars of sound.

Cuckoo Variations was commissioned by the Texas State University Bands as a part of the 2019 centennial of the program.