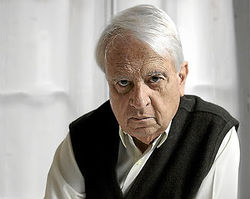 Halffter was born in Madrid, but in 1936 the family moved to Velbert, Germany, to escape the Spanish Civil War. They returned to Madrid in 1939, and Halftter studied with Conrado del Campo at the Madrid Royal Conservatory, graduating in 1951 (Alonso 2001). Outside of his university education, he studied with Alexandre Tansman and André Jolivet.

In 1955, he was appointed conductor of the Falla orchestra. He forged a successful career as composer and conductor, writing music which combined a traditional Spanish element with avant-garde techniques. His piano concerto won the National Music Prize in 1953. In 1961 he became professor of composition at the Royal Conservatory of Madrid, where he became director in 1964 but remained only until 1966. Among his notable pupils are Jean-Luc Darbellay, David Philip Hefti, and Javier Jacinto.

He was awarded Spain's highest award for composition, the Premio Nacional de Música, in 1989.

Halffter's works include the opera Don Quijote (2000). His second opera, Lazarus, was premiered in 2008 at the Kiel Opera House to celebrate its centenary. A third opera, Schachnovelle, with a libretto by Wolfgang Haendeler after the eponymous novel by Stefan Zweig, premiered at the same house in May 2013.

Cristóbal Halffter is regarded as the most important Spanish composer of the generation of composers designated the Generación del 51.