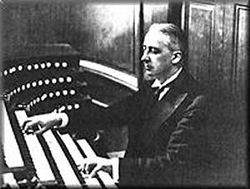 Cortège et Litanie by French composer Marcel Dupré was first composed in 1922 as incidental music for a play which was scored for an instrumental ensemble of eleven instruments. Dupré later made a version for piano solo, but the piece is now most well-known as a work for organ (the instrument on which Dupré was a virtuoso and wrote his most well-known pieces for.). I first heard this work while when I was learning organ as an undergraduate student. During a studio class, a fellow student played the piece and I immediately began to hear it orchestrated in my head. Even though I originally imagined strings for the opening (and later found out about another version that Dupré made for organ and orchestra which does just that,) in 2013 I realized how wonderfully this work could sound with a concert band instead and began to plan the creation of this arrangement.