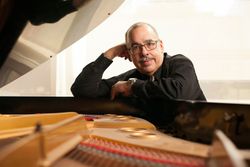 The Concerto for Saxophones and Orchestra was commissioned by the Detroit Symphony for saxophonist James Carter from Roberto Sierra, marrying classical and jazz elements and showcasing Carter’s virtuosity. Premiered by the DSO and its music director, Neeme Järvi, in October of 2002 and reprised by them in 2003.

You read accounts of premieres 150 years ago where the audience clamored to have movements repeated. In your lifetime, did you ever witness such a thing — the reprise of a new work, on the spot? Neither did I, until Thursday night, when Carter and conductor Neeme Jarvi finally gave in to a storm that showed no signs of abating and recapped the last long stretch of Roberto Sierra’s brilliant Concerto for Saxophones.

In its wisdom, Universal Music Group’s EMARCY label felt the Concerto for Saxophones merited a much wider hearing and thus recorded the concerto in December 2009 in Warsaw, Poland with the Sinfonia Varsovia, Giancarlo Guerrero, conducting and James Carter as soloist.