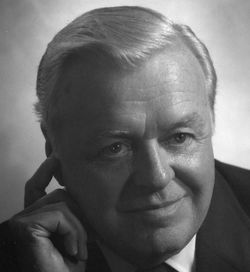 The first full concerto originally written for solo horn with concert band was a collaborative project with James Chambers and the American Bandmasters Association (ABA). It was premiered on March 9, 1957, at the ABA Convention, Pittsburgh, Pennsylvania with the U.S. Air Force Band and Mr. Chambers as soloist.

All or part of the work may have been previewed as a “Sonata” on a program of the 1955 American School Band Directors Association Convention. No evidence of a sonata exists, but both Mr. Chambers and Mr. Hermann are listed in the program on a performance.

The first edition, for band or orchestra, was published by Educational Music Service in 1958. The second edition reduced the score significantly, from a total length of twelve minutes down to eight. In the process, the band parts were edited and left out the cut sections, while the score and solo part continued to include all the material. This confusion must be cleared up by reviewing the publisher’s notes and making the noted cuts in the score and solo part. The solo with piano accompaniment may be performed in its entirety. Publication rights were transferred to Podium Music in 1962, which was subsequently bought out by Jenson Publications and Hal Leonard. Company officials have no knowledge of the work in their inventory, and it is considered out of print.

The original manuscript resides in the Nutt Archives of VanderCook College in Chicago, Illinois, showing the full instrumentation of the original length version.