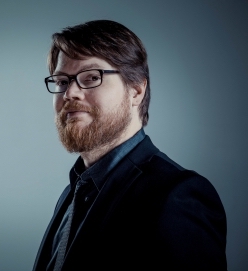 SFC Matthew Wozniak and the West Point Military Band commissioned my concerto for bass trombone in late 2004. The piece is in one movement comprised of five sections. All the ideas are interrelated and evolve in such a way as to facilitate a kind of convergence at the work's jubilant ending.

The lyrical capabilities of the bass trombone are largely overlooked, and its dexterity is a quality that is rarely heard outside of its rather small solo repertoire. But it can also play louder than a freight train and can bury almost any other instrumental combination with the exception of the piccolo, which has a prominent part as well. The discourse between extremely high and extremely low registers recurs throughout the work, as does the occasional freight train.