Concert(in)o for Marimba and Wind Quintet 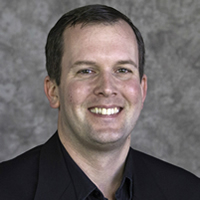 Concert(in)o for Marimba and Wind Quintet was composed between August 2015 and November 2016. It was commissioned by, and is dedicated to, Dr. Jeffrey Barudin. Jeff has been a good friend of mine since our days as undergraduate students at Penn State University, where we both studied percussion with Dan Armstrong and Gifford Howarth. Even though Jeff’s doctorate took him to the University of Michigan and mine took me to the Eastman School of Music, we had a reunion of sorts when we both landed jobs in St. Louis, Missouri, in 2010. He was kind enough to premiere my Interactions for Baritone Saxophone and Percussion (with Adrianne Honnold, saxophone) in 2014. It was a great treat to see the apparent ease with which Jeff approached that intricate and highly choreographed score, and as such, I was thrilled when he approached me about writing this piece.

My idea for this piece was to write a marimba concerto that might be performable as a recital piece. I remember being frustrated as an undergraduate percussionist that the only opportunities I had to explore the concerto repertoire would be with a piano reduction. Pairing the marimba with a small, well-established chamber ensemble such as a wind quintet seemed like a natural way to make it reasonable for a marimbist to perform this piece in its original instrumentation. Additionally, given the marimba’s modest dynamic range, the use of a quintet eliminates many issues of balance (and even amplification) that arise in concerti for marimba with full orchestra. The title, Concert(in)o, uses parentheses to play on the gray line that separates a “concerto” from a “concertino.” While I view this piece as a concerto for marimba, the word “concertino” more accurately describes the size of the ensemble.