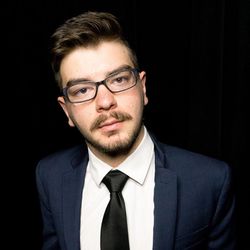 Collin Kemeny (b. 1995) is a Canadian-American composer and student.

Mr. Kemeny writes rhythmically-driven music demonstrating both harmonic and melodic influence from the Great American Songbook. Though noted for his stylistic versatility, his interest in color and timbre drives his artistic voice. His recent works, often autobiographical, explore the imprint that small, intimate moments may leave on the human psyche, and how to communicate these complex sentiments through music.

Outside of composing, Collin is an avid hiker, finding inspiration from nature, and is a founder of the Ingeniare Quartet.