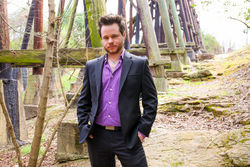 Cody Brookshire (b. 1985) is an American composer and educator.

Mr. Brookshire is a doctoral candidate at the University of Georgia and is finishing his dissertation while currently teaching composition and music theory at Reinhardt University in Waleska, Georgia.

His music has been performed at events and venues ranging from the New York City Electroacoustic Music Festival, to SEAMUS and CBDNA National Conferences, to the Oh My Ears! Marathon Concert in Arizona, including international performances ranging from the Audiograft Festival of Contemporary Experimental Music and Sound Art in Oxford, to the Guangzhou Grand Theater in China, and the Freedom On My Doorstep installation project at the Wiltshire Heritage Museum in England. He has composed for and worked with artists such as Sō Percussion, Great Noise Ensemble, Transient Canvas, the Athens Guitar Duo, Chamber Cartel, MOD[ular] Ensemble, the Hodgson Wind Ensemble at the University of Georgia, the Patriot Choir and the String Orchestra at the University of North Georgia, and conductors Cynthia Johnston Turner, Jaclyn Hartenberger, John Lopez, and Tyler Ehrlich.

Awards include 1st place in the 2015 Electrobrass National Composition Competition for From Afar, Drawing Near; 1st place in the 2014 and 2nd place in the 2015 Southeastern Composer's League Philip Slates Memorial Competition for Shrapnel and Irreconcilable Differences, respectively; as well as a 2015 Judge's Honorable Mention for the American Prize in Composition, student chamber division, for PRISM. Several of Brookshire's works have been professionally recorded and released including PRISM which appears on second record of the Athens Guitar Duo, "Recuerdos" on Claudio Records. M3TA11UR6Y, We Could Live Forever Tonight, and From Afar, Drawing Near appear on various electroacoustic compilation albums on the EMPiRES label, while OMEGA and Wasting All My Precious Time both appear on releases on Good Static Records. A short electronic work, Harmonic Meditation, No. 1 appears on the 2014 SEAMUS Miniatures album Transients.