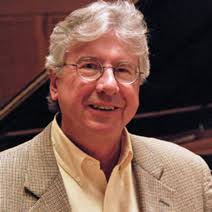 Claude Baker was born on April 12, 1948 in Lenoir, North Carolina. He attended East Carolina University where he graduated magna cum laude in 1970 with a bachelor’s degree in theory and composition. He received Master’s (1973) and Doctorate (1975) Degrees from the Eastman School of Music, studying composition with Samuel Adler, Wayne Barlow, and Warren Benson. He has taught at the University of Georgia (1974-76), the University of Louisville (1976-88), the Eastman School of Music (1985), and Indiana University (1988-). He has also served as Composer in Residence with the St. Louis Symphony (1991-1999) and won the Academy Award in Music from the American Academy of Arts and Letters (2002). Baker has also received commissions from the Brevard Festival Orchestra, the Cleveland Chamber Symphony, the Koussevitzky Foundation, the Louisville Symphony, the National Symphony, and the North Carolina Symphony. Other orchestras which have performed his works include the Atlanta Symphony, the Indianapolis Symphony, the Nashville Symphony, the New York Philharmonic, the Pittsburgh Orchestra, and the San Francisco Symphony.