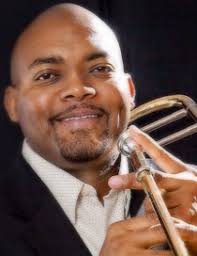 Clarence Hines (b. 1974) is an American composer, trombonist and educator.

Dr. Hines has performed throughout North America, Central America, and Europe, and has performed with musicians such as Slide Hampton, Bob Brookmeyer, Johnny Mathis, Josh Groban, the Temptations, and most recently with Diane Schuur. He has performed on numerous occasions at the North Sea Jazz Festival in the Netherlands, the East Coast Jazz Festival, and the Jacksonville Jazz Festival.

As a composer and arranger, Clarence has written works for various ensembles ranging from large and small jazz ensembles to studio orchestras. His works have been premiered in the Distinguished Concerts International concert series at the Lincoln Center for the Performing Arts, the International Tuba-Euphonium Conference, the Midwest Clinic, and the International Association for Jazz Education. Clarence’s music has been performed by top military and college jazz ensembles around the country, including the U.S. Army Jazz Ambassadors and U.S. Army Blues, Eastman School of Music, and the University of Texas-Arlington.

Currently, Dr. Hines is an associate professor of jazz studies at the University of North Florida. He is a recipient of UNF’s Outstanding Undergraduate Teaching Award for 2012-2013. Prior to teaching at UNF, Clarence coached combos and directed the Jazz Lab Band at the Eastman School of Music where he studied composition and arranging with Bill Dobbins. He has served on the faculty of the Eastman Summer Jazz Studies and the Tritone Fantasy Jazz Camp and is currently on the faculty of the Birch Creek Music Performance Center‘s Jazz Session in Door County, Wisconsin. Additionally, Clarence served as a trombonist/paratrooper in the “All-American” band of the U.S. Army’s famed 82d Airborne Division and the 79th Army Band in the Republic of Panamá.