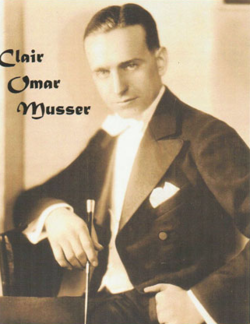 Clair Omar Musser (14 October 1901, Penn. – 7 November 1998, San Fernando Valley, Calif.) was a marimba virtuoso, a conductor and promoter of marimba orchestras, a composer, a teacher, a designer of keyboard percussion instruments, an inventor, and an engineer for Hughes Aircraft.

Musser was raised with his brother Willoughby, as a member of the Mennonite Church in Lancaster, Pennsylvania. Omar began to study the xylophone in the fifth grade. Upon witnessing a performance of Teddy Brown playing marimba with the Earl Fuller's Rector Novelty Orchestra, Musser was inspired to study with Brown's former teacher, Philip Rosenweig. Musser soon became recognized as a virtuoso in his own right, performing as a soloist, with orchestras, and in an early Warner Bros. Vitaphone film.

Musser's first major project as a designer was a unique instrument called the marimba-celeste, built at the J.C. Deagan factory in Chicago. Essentially, the instrument combined a marimba and a vibraphone, with a built-in amplification system for the lower marimba keys. Musser toured with this instrument between 1927 and 1930.

Some time between 1949 and 1950, Musser designed and built a predecessor to the drum machine, alliteratively called the "Musser Maestro Marimba Metron", or more simply the "Rhythm Machine." The machine plays 13 electronically generated rhythmic accompaniments such as the bolero, waltz, rhumba, cha-cha, tango, samba, and beguine. In addition to the pre-set loops.

Musser's final design project was the celestaphone, an instrument which served to merge Musser's interests in outer space and music. The frame and the bars were forged from 678 pounds of meteorites from Musser's own collection, which he began gathering from all over the world in 1936. In design and appearance it most closely resembles a pedal glockenspiel.

One of the most notable of Musser's contributions to the world of percussion is his work as a conductor and promoter of large marimba orchestras. One of the first of such groups was a 25-piece, all-girl marimba ensemble for a Paramount Pictures event in Chicago. In 1933 at the Century of Progress International Exhibition in Chicago, Musser conducted a marimba orchestra of 100 players. A special marimba, the "Century of Progress Model", was designed by Musser and produced by the Deagan company. Most of Musser's future marimba orchestras would follow a similar model. That is, Musser would select players, arrange and write the music, rehearse and conduct the orchestra, and design a special instrument for the group. The largest group Musser had ever assembled was an orchestra of 300 marimbas appearing at the Chicago Railroad Fair in 1950.

Musser joined the J.C. Deagan Company in 1930 as manager of the mallet instrument division. Perhaps the most significant development of Deagan instruments under his leadership was in the area tuning. Marimbas and xylophones to this point had a reputation for sounding "out of tune" due to certain inherent features of their design in the absence of modern acoustical theory. Musser was a member of the Acoustical Society of America and the Society for the Advancement of Science. He understood Fourier's theorem and the applications of that theorem to the tuning of a marimba bar. This understanding allowed Musser and the technicians at Deagan to tune not just the fundamental but also the harmonics of the bar, creating a clear and unmuddled pitch.

Following World War II, Musser left the Deagan Company to start his own firm, Musser Marimbas. In addition to marimbas, the company made vibraphones, xylophones, glockenspiels and chimes. Business acumen was not one of Musser's strengths, and the company was sold to Lyons Band Instrument Manufacturers in 1956.

Musser founded the marimba studies program at Northwestern University, the first of its kind, and headed the department from 1942 until 1952. There he instructed many outstanding marimba artists and teachers, including Vida Chenoweth.