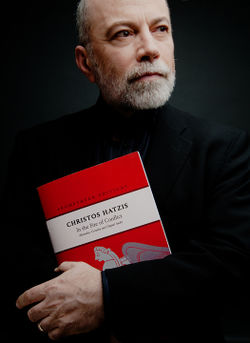 Christos Hatzis (b. 23 March 1953, Volos, Greece) is a Greek-Canadian composer and educator.

Dr. Hatzis received his early music instruction at the Volos branch of the Hellenic Conservatory. He continued his musical studies in the United States, first at the Eastman School of Music (B.M. 1976 and M.M. 1977) and later at the State University of New York (SUNY) at Buffalo (Ph.D. 1982). His composition teachers include Morton Feldman, Lejaren Hiller, Wlodzimierz Kotonski, Samuel Adler, Russell Peck, Joseph Schwantner and Warren Benson.

He immigrated to Canada in 1982 and became a Canadian citizen in 1985.

Hailed as "one of the most important composers in Canada" (International Musician), he is now an internationally renowned composer, being the recipient of awards such as Jean A. Chalmers National Music Award (1998), (Governor General) Jules Léger Prize for New Chamber Music (1996) and two Juno Awards, in 2006 and 2008.

Hatzis' music is inspired by Christian spirituality, particularly his Byzantine heritage, and the Canadian Inuit culture. In addition to composing and teaching, Hatzis has written extensively about composition and contemporary music.

Dr. Hatzis is currently a professor at the Faculty of Music, University of Toronto, and a member of the Canadian Music Centre.