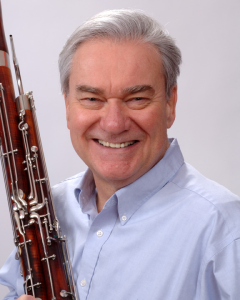 Weait led high school bands for two years, and then taught at the University of Toronto and was a visiting professor at the Eastman School of Music and Indiana University. Weait has taught at Ohio State University since 1984, where he was named the School of Music’s Teacher of the Year in 1999. In 1994-1995, he was interim conductor of the Ohio State Concert Band.

Weait was a member of the Chamber Symphony of Philadelphia and the U.S. Military Academy Band at West Point before being named principal bassoonist of the Toronto Symphony Orchestra in 1968, a position he held for 17 years. He also has recently made tours with Keith Brion and the New Sousa Band.

Weait is the author of several significant teaching resources on bassoon pedagogy and has edited performance editions of woodwind literature. In addition to his original band works and transcriptions, he has composed pieces for solo instruments and has transcribed works for wind ensembles of varying sizes.