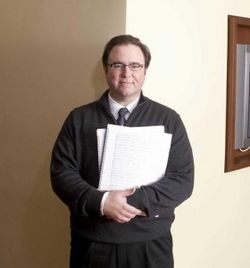 Christopher Theofanidis (b. 18 December 1967, Dallas, Texas) is an American composer and educator.

Mr. Theofanidis holds degrees from Yale, the Eastman School of Music, and the University of Houston, and has been the recipient of the International Masterprize (hosted at the Barbican Centre in London), the Rome Prize, a Guggenheim Fellowship, six ASCAP Gould Prizes, a Fulbright Fellowship to France, a Tanglewood Fellowship, and the American Academy of Arts and Letters’ Charles Ives Fellowship. In 2007 he was nominated for a Grammy for best composition for his chorus and orchestra work, The Here and Now, based on the poetry of Rumi. His orchestral concert work, Rainbow Body, has been one of the most performed new orchestral works of the last ten years, having been performed by over 100 orchestras internationally.

The composer has had performances by many leading orchestras from around the world, including the London Symphony, the New York Philharmonic, the Philadelphia Orchestra, the Moscow Soloists, the National, Atlanta, Baltimore, St. Louis, Detroit Symphonies, and many others. He also served as Composer of the Year for the Pittsburgh Symphony during their 2006-2007 Season, for which he wrote a violin concerto for Sarah Chang.

Mr. Theofanidis has recently written a ballet for the American Ballet Theatre, a work for the Orpheus Chamber Orchestra as part of their "New Brandenburg" series, and he currently has two opera commissions for the San Francisco and Houston Grand Opera companies. He has a long-standing relationship with the Atlanta Symphony, and has just had his first symphony premiered and recorded with that orchestra. He has served as a delegate to the US-Japan Foundation’s Leadership Program and is a former faculty member of the Peabody Conservatory and the Juilliard School. He currently teaches at Yale University.