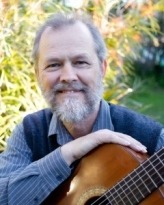 Christopher Sainsbury (b. 1963, Australia) is an indigenous Australian composer, guitarist and educator.

Dr. Sainsbury holds a bachelor's degree from the National Rivers College of Advanced Education, as well as master's and Ph.D. from the University of Sydney.

Dr Sainsbury is an accomplished composer and a highly experienced music educator. He is also a guitarist, and a musician who is as much focused on community as he is on industry. For some 35 years he has made a steady and sustained contribution to Australian music as a working composer in both professional and community music arenas. His output ranges from solo instrumental works to children’s songs, jazz to folk, and chamber works to large orchestral works.

Sainsbury has made a sustained contribution to Australian music as a working composer in both professional and community music arenas for many years. He won the Young Australian Composer Award in 1986, the College Medal from the Northern Rivers College of Advanced Education (NRCAE) in 1986, and was commissioned in 1988 by the Australian Chamber Orchestra for his Homage to TS Eliot. Later, in 1994 his incidental music for the play Aboriginal Protestors was featured at the Sydney Festival and the Weimar Festival, and in 2010 his orchestral work First Light won an international scores competition hosted and performed by the New England Philharmonic Orchestra, Boston, USA.

Sainsbury is a member of the Dharug nation (the indigenous people of Sydney). He explores ways to sound his Australian indigenous heritage, and draws upon sounds from his ‘aural homelands’ of Sydney and the Central Coast, referencing these in his music. This dovetails in well with his research focus on regional and community music. In 2015 he was the recipient of an Art Central Grant from Regional Development Australia (Central Coast) for Civic Melancholy and Brackish Songs. In 2016 he had commissions from Primal Dance Company for the modern ballet work Scar Tree (for the Sydney Fringe Festival and East Coast Tour). In 2019 his regional narrative-based work Bark of the ‘bidgee was commissioned by the Canberra International Music Festival.

Sainsbury previously held a full-time position at Eora College -- an indigenous college in Sydney -- where he was both a music teacher and/or head of arts and media from 1990 to 2015. He has also taught at UTS and at Avondale College. His work with other indigenous musicians has resulted in several major APRA grants for the Indigenous Composer Initiative (now known as Ngarra-burria: First Peoples Composers) in which he works closely with Moogahlin Performing Arts Redfern.

In his long-term home of the Central Coast he was director of a large community choir for several years. He has also been musical director for many Aboriginal theatre and music events in Redfern including Sydney’s first Koorabaret in 1992. He has performed his own compositions from his solo guitar CD Anima at venues in all the south-eastern states.

Dr. Sainsbury is currently [2021] lecturing in composition and musicology at the Australian National University. H