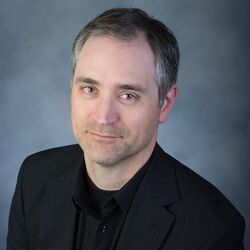 Christopher Dietz (b. 1977) is an American composer and educator.

Dr. Dietz holds a Ph.D. in composition and theory from the University of Michigan where he studied with William Bolcom, Bright Sheng, Michael Daugherty, Betsy Jolas, and Andrew Mead. In addition, he holds degrees from the Manhattan School of Music where he worked with Nils Vigeland and Giampaolo Bracali and the University of Wisconsin where his teachers included Stephen Dembski and Joel Naumann.

Dietz composes music inspired by a wide variety of sources, both real and conceptual. Poetry, sound as sculpture and color, how toddlers play, deep time and the cosmos, rhythm as geometry, religion and politics, animal behavior, and the music of others are a few of the subjects that have informed his musical imagination. A similarly diverse approach to the creation of each new piece has resulted in a collection of works distinct in their surface features yet bound together by a common vitality, nuanced palette, and a commitment to engaging with others.

In recent years, Christopher’s works have been premiered in Ghent (Belgium), London, Auvillar (France), Montreal, Ottawa, New York, Los Angeles, Washington, Houston, Phoenix and Salt Lake City, among others. His music has been performed by numerous contemporary ensembles including Alarm Will Sound, Decoda, Ensemble Échappé, NODUS, as well as traditional ensembles such as L’Orchestre de la Francophonie, The San Jose Chamber Orchestra, the University of Michigan Symphonic Band and additional university ensembles across the United States.

He has been on the faculty at Hillsdale College and the Oberlin Conservatory. Christopher is [2022] an associate professor at Bowling Green State University in Ohio where he teaches composition and directs the new music ensemble.